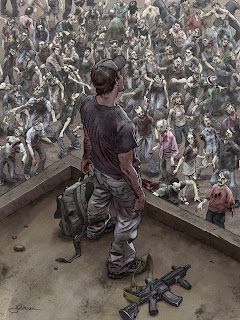 Just in time for Halloween, I finished this one today. It’s pretty much a metaphor for how I feel about the zombie genre overall. I think the moment I saw the trailer for the film Warm Bodies was when I decided that the whole zombie thing had gotten out of hand (I don’t suppose it bothered anyone that the protagonist’s status as a zombie technically made his love interest a necrophiliac, but whatever). Hopefully this illustration gets across the idea of the saturation of zombies in pop culture leading to a feeling of being overwhelmed or just tired of the whole damn thing.

As a side note, and to crystallize that jaded feeling, I finally saw the movie World War Z. I resisted for a long time, because the trailer looked like an utterly disappointing departure from the book. If you read the paperback, you’ll find my artwork inside the front cover. It was the first time my artwork saw a major publication, so needless to say I have a particular attachment to Max Brooks’ source material. I thought the movie was sterile, PG-13 garbage. Absolute drivel. I didn’t expect it to be 100% faithful to the book, but a zombie movie should at least have its share of blood and gore. When the hero brains a zombie with the curved end of a crowbar, not only do we see it off-camera, but he dislodges the weapon and we see there’s not a drop of blood on it. I audibly yelled “Oh, bullshit!” to my empty apartment. I almost didn’t make it through the entire film. I didn’t care about any of these characters, least of all the protagonist (fabulous scarf, by the way). I didn't care if he made it back to his family, or if his family even survived.

Perhaps one day they’ll do justice to the book and call do-over, making it into a miniseries (the scope is just too vast for even a 3-hour movie), but for now I think I’m just over zombies.
Posted by John Petersen at 5:05 PM No comments: 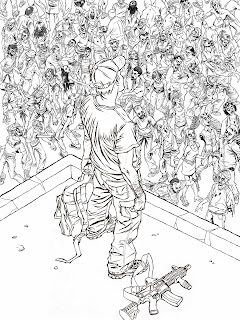 Christ, the line art took forever on this one.

Drawing crowds is difficult, especially if you want to maintain any level of detail in the faces and clothing. That’s the problem I ran into with this one; it took a long time to finish the line art. I also incorporated several faculty and students from the Illustration Master Class, which meant I had to at least try to capture their likenesses as best as I could. Again, quite difficult because I don’t exactly have a lot of photographic reference of my colleagues shuffling around slack-jawed from an overhead angle. But I’m a sucker for detail, and have always been a fan of Geof Darrow’s work. That said, an entire urban landscape with buildings and hundreds of windows would have been easier; geometric perspective is all you need for that.

At any rate, I’m ready to start coloring this. I realize there are a couple of places that need some fixing, and some legs that need to be drawn, and perhaps a few embellishments, but I’ll get to that. The good news is that the hard part is mostly finished; this thing is going to be a snap to color.
Posted by John Petersen at 1:41 PM No comments: 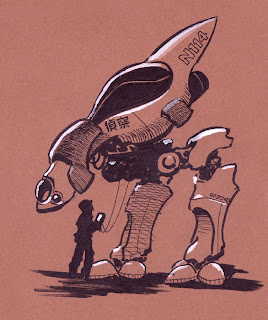 Well, this one didn't take nearly as long as Saturday's portrait. Just a concept sketch of a scout mech.
Posted by John Petersen at 9:21 AM No comments: 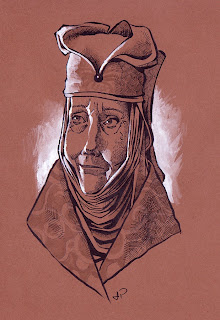 I might be a few days late for Inktober, but here's my first offering. A slightly caricaturized portrait of Olenna Tyrell (played by Diana Rigg), one of my favorite characters from Game of Thrones. They gave her a lot more personality and attention in the show than she received in the books.
Posted by John Petersen at 9:40 PM No comments: 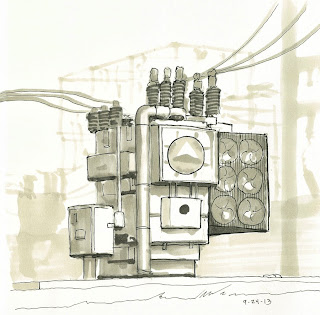 The other day I was stuck at work, making last-minute revisions for a client until about 7:00. After sitting in front of a computer screen all day I needed some fresh air. I just started walking the trail behind the vet med college and noticed this big electrical substation (if that's what you call it; help me out, engineers) that I had never really looked at before. It was magic hour, so the sun was casting interesting shadows on all the equipment. I suddenly got inspired.

I'm interested in making concept art, so what I've been doing for many years was take photos of stuff like this to save for later reference. However, what invariably happens is I take my camera home, copy files to my assets folder, and there they sit, almost never to be looked at again. This day I decided to try something different.

So I sat down on the grass, took out my moleskine, and started drawing this thing, whatever it is. I found as I completed the sketch I got so much more out of it than if I had taken a photo and moved on. The process of spending a half hour drawing this object helped imprint the shapes and connections onto my brain in ways that snapping a quick photo couldn't. So the next time you see something interesting and you're not in a big hurry, just stop, sit down, and draw the damn thing.
Posted by John Petersen at 12:55 PM No comments: 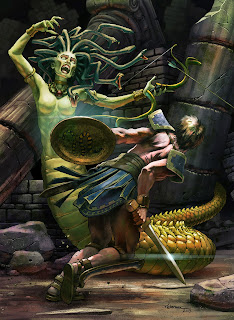 It really is a shame that I haven’t been posting here as frequently as I should be. Selling my house and moving consumed a lot of my time, but that’s really no excuse. At any rate, I finished this painting last month. After some great feedback from my IMC peeps and excellent advice from Dan Dos Santos and Greg Manchess, I tweaked the bounce light and gave it some more polish. I hope I didn’t overdo the lens flare on his sword and shield, but I really couldn’t resist. At least I painted it in and didn’t use a filter, right?
Posted by John Petersen at 11:01 AM No comments:

I remember watching Clash of the Titans as a kid, and the scene in which Perseus fights Medusa, featuring brilliant stop motion animation by special effects legend Ray Harryhausen, scared the piss out of me. But I've always been fascinated by these characters, particularly Medusa, turned into a hideous monster for the crime of being a rape victim. Oh, you silly Greeks. 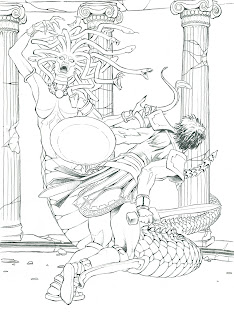 I took some reference shots and posed some models in Daz 3D to get them just so, and I was fairly happy with the characters. My first pass at the background, however, was not so great. The vertical columns are way too static and straight in contrast to the diagonal, flowing foreground action. With some great suggestions from my illustration colleagues I ditched this background and attempted a new, more dynamic composition. 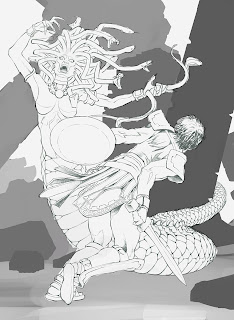 The problem is that working with biologists and engineers for so long has the left-brained science nerd inside me yelling "No, no, no; Greek stone columns weren't designed to sustain an off-vertical angle; they would collapse under their own weight with unbuttressed support." So my right-brained artist is going "Shut up, science nerd. I just drew a woman with living snake hair; I don't need an engineering lesson. Give me your lunch money."

The new background silhouette, sketched digitally, turned out way better. I'm going to print this, break out the tracing paper, and pencil in some ruins.

Posted by John Petersen at 2:54 PM No comments:

John Petersen
I live and work in Ames, Iowa as a 3D animator and freelance illustrator. I graduated from college here in 2001 with a BA in Scientific Illustration. I ride my bicycle everywhere and keep myself busy with exercise, playing drums, drawing and painting.